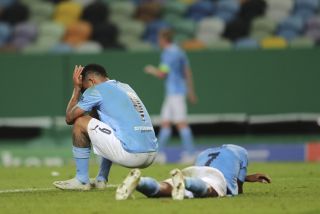 Kevin De Bruyne admitted Manchester City were not good enough after crashing out of the Champions League at the hands of Lyon in Portugal.

Moussa Dembele struck twice in the closing minutes – either side of a dreadful miss from Raheem Sterling – as the French side claimed a shock 3-1 win in their quarter-final tie at the Jose Alvalade Stadium in Lisbon.

The defeat prolongs City’s wait for success in Europe’s elite competition and was their third in succession at the last-eight stage.

De Bruyne, who had pulled City back into the game by cancelling out Maxwel Cornet’s first-half strike, told BT Sport: “It’s a different year, but the same stuff. I think the first half wasn’t good enough. I think we know that.

“We started slowly and we didn’t have many options. I think second half we played really well.

“We had them under pressure, we played more offensively, like we normally do, and I think we had them.

“We created enough second half to score enough goals but we need to learn, it’s not good enough.

“This team is great but we made too many mistakes. It’s what we’ve done all year.”

Lyon’s second goal 11 minutes from time came in controversial circumstances with City believing Aymeric Laporte had been fouled in the build-up. VAR took a long look at the incident but saw no reason to disallow the goal.

City boss Pep Guardiola said: “It happened many times in this competition. It is what it is, the referee and VAR decided.

“I don’t want to talk about the circumstances. It looks like I am complaining or finding causes. We are out.

“I had the feeling we were ready but we make mistakes. That’s why we are out.”

Sterling should have made the score 2-2 after 86 minutes, and potentially taken the tie to extra time, but contrived to miss an open goal from five yards.

Guardiola did not want to talk about that particular incident.

“I haven’t seen him yet,” said Guardiola. “In the locker room the players were sad and now we will talk in the hotel, but it’s part of the game.

PEP 💬 It is what it is. One day we will break the gap to the semi-finals. Second half was okay, we were there, I had the feeling we were better, but you have to be perfect in this comp and we didn't.— Manchester City (@ManCity) August 15, 2020

“The football in this competition, we know we can do many things, but in the boxes you have to be serious. Not concede the goals we concede especially the second one.

“Maybe one day we’re going to break this part of the quarter-finals. We are not able to do it, I was not able with these incredible, clever guys – but we’re going to try in the future.”

Lyon, through to a potentially daunting semi-final against Bayern Munich, were rank outsiders having finished seventh in the curtailed Ligue 1 season this year.

Coach Rudi Garcia, whose appointment last autumn was not widely welcomed by fans, said: “I’m proud of my players. We believed in ourselves. We knew we weren’t favourites and we were playing a top team.

“Above all our success was down to our team spirit. Everyone worked for each other and the substitutes helped a lot.

“We won the tactical battle. There are still matches to be played and hurdles to overcome and we’ll try to overcome them.”

The key substitute was Dembele, who came on in the 75th minute to make a dramatic impact.

Garcia said: “Moussa was disappointed not to start but I told him before the match that he would be very, very important when he came on.”