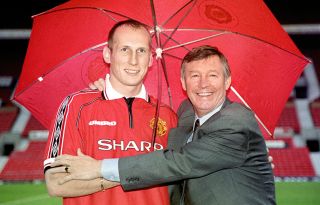 Jaap Stam has admitted to FourFourTwo that his 2001 transfer from Manchester United to Lazio was as much of a shock to him as everyone else.

Stam has answered a broad range of readers’ questions in the July 2020 issue of FFT – a Brazil special out in shops now and available to order online with free delivery – and speaks at length about how his departure really went down almost 20 years ago.

The trouble began after a series of prickly extracts were published from his autobiography in The Mirror, sparking a chain reaction of events which led to Alex Ferguson informing him at a petrol station that he had been sold.

“When a paper buys the rights to publish extracts from a book, they can make up their own headlines – and that was what troubled me,” Stam told FFT. “I asked them [The Mirror] to let me know in advance, but they didn’t do that.

“It kept me awake at night, as I was wondering what would be in the paper the following day. Initially, Ferguson had told me not to worry about it, but on Wednesday – the morning of the match – I was informed that I should report for talks with him the next day, because he wasn’t happy about some of it.

“After the game, I went home and reported the next morning at 8am, because I was keen to resolve the matter. I said, ‘You know what’s in the book – nothing bad’. But he maintained that he wasn’t happy. A week later, I was left out for a game against Blackburn. On the day, he called me to say I wasn’t in his squad because of the book hassle. He felt it might calm down if I wasn’t playing. We had a few conversations, although none of them were really satisfactory.

“A bit later that week, I was driving home from training when my agent phoned, telling me I’d been sold. I was like, ‘What?!’ He said, ‘Yeah, they’ll contact you in a minute’.

“Moments later, Ferguson called me and asked where I was. We lived in the same area, and he told me to wait for him so that we could have a chat. I pulled into a petrol station and he met me there. When he arrived, he got in my car and told me that the club had accepted an offer from Lazio. It was a big shock.”

Stam reveals more details about those circumstances and addresses his relationship with Ferguson in the magazine, but also explained that Manchester United team-mate David Beckham tried to intervene upon his arrival in Italy.

“Just after I arrived in Rome, I got a call from David Beckham,” he said. “The United squad had spoken about it, and he expressed the general feeling among them that I should stay.

“My departure was a big blow to everyone, as nobody expected it to happen. It was nice to hear that from him, and it showed how close we were as a group. That made it tough to leave, but given the situation at the time, I felt it was better for me to go.”

FEATURE Bruno Fernandes's remarkable story – the Manchester United star's rise, told by those who know him