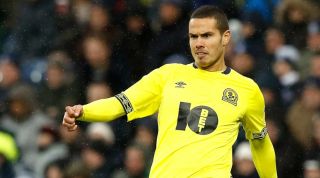 The Serie A giants are currently in the midst of a crippling injury crisis that has seen eight first-team players sidelined.

Paulo Fonseca’s side have turned to the free agent market to ease their problems, according to the Mail Online.

The outlet reports that the 28-year-old is due to arrive in Italy for talks with the capital club that could see him pen a deal until the end of the season.

Rodwell will undergo a series of fitness tests over the next two days to make sure he is in decent shape before the club commits to a contract.

The midfielder was highly rated as he came through the ranks at Everton as a teenager, before joining Manchester City for £12m in August 2012.

He joined Sunderland two years later and remained at the north east club until last summer, when he joined Blackburn on a year-long deal.

Rodwell, who has three England caps to his name, has been a free agent since leaving Rovers earlier this year.

His experience of top flight football makes him one of the more attractive options on the market for the Giallorossi as they look to find a quick fix to their issues.

Fonseca was forced to play defender Gianluca Mancini in midfield during Thursday’s 1-1 draw with Borussia Monchengladbach in the Europa League.

Scottish referee Willie Collum pointed to the spot in stoppage time with Roma leading after penalising Smalling for handball, but replays showed the ball struck him in the face.

Lars Stindl converted to earn the Bundesliga leaders a point and cancel out Nicolo Zaniolo’s first half opener.