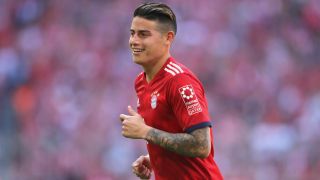 James Rodriguez insisted he is very happy at Bayern Munich despite reports he could cut short his loan deal to return to Real Madrid.

James is halfway through a two-year loan agreement after leaving Madrid for Bayern, who have the option to purchase the Colombia star permanently for a reported €42million in 2019.

The 27-year-old has excelled in Bavaria, where he helped Bayern retain the Bundesliga title last season, though he has been linked with a Madrid recall following Cristiano Ronaldo's sensational move to Juventus.

James, however, appears content at Bayern – who are seeking their seventh successive league trophy in 2018-19.

"I feel like the club and the fans love me very much."