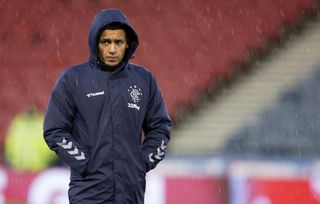 The Ibrox side started 2020 believing they were set to end Celtic’s reign of dominance after claiming victory at Parkhead.

December’s 2-1 victory over Neil Lennon’s team saw Gers close to within two points of the champions with a game in hand.

But barely six weeks into the new year those title dreams lie in tatters.

Away losses to Hearts and Kilmarnock, plus a goalless draw with Aberdeen at Ibrox, have seen for Steven Gerrard’s squad spill eight points in the space of just five games.

It is a similar story to last year’s campaign when Gers entered the winter break on the high of derby triumph only to be brought crashing down at Rugby Park, allowing the Hoops to romp away to the crown.

There remains time for the Light Blues to turn around the 10-point deficit they now face this year but that unlikely feat would in all probability require them to topple their bitter rivals in both remaining Old Firm clashes, while also receiving a favour against the Hoops from elsewhere.

Before they can do that, though, Gerrard’s men will have to get to the bottom of what’s causing their slump – but Tavernier confessed he is clueless.

“I honestly can’t answer for the last two Januarys,” he said. “We’ve gone from ending the year on a high both times and putting ourselves into good positions and then coming back and I can’t put my finger on what’s happening.

“We’re not getting out of the blocks at the start of the year and it’s costing us.

“We’ve made it harder for ourselves, definitely.

“We had it in our hands and knew what we had to do. It was as clear as day.

“Go all the way until the end of the season unbeaten and we’d be in a very good position, but now we’ve made it very hard for ourselves with a shocking display in the second half at Kilmarnock.”

Gers were sitting pretty at the break in Ayrshire after taking the lead with a Scott Arfield rocket.

But just as they did against the Jambos last month, Gerrard’s team were unable to hold onto their lead and surrendered all three points as they allowed Killie’s Stephen O’Donnell and Eamonn Brophy to fire home.

Tavernier said: “We’ve been in this situation a few times where we go to a ground and the crowd sniffs out opportunities and we simply don’t deal with it.

“We were in a great position after the first half. We were controlling the game, they didn’t have many chances, we were creating some without being clinical.

“Second half we go out and we’re still in the driving seat at 1-0 up.

“It was said at half-time: a clean sheet will win the game. But since we’ve been back after the mid-season break, we’ve been conceding terrible goals.

“We never get opportunities to score goals like that ever in a season and it’s criminal we are conceding them as a team.

“If you want to be competing for a title, you can’t be conceding those type of goals.”