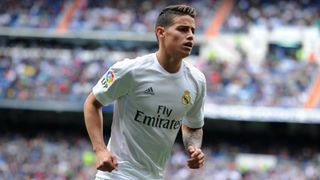 James Rodriguez has vowed to stay and fight for his place at Real Madrid, despite claiming the club have received an €85million bid for his services.

The Colombia forward has been linked with a move away from the European champions after losing a regular place in the starting XI under Zinedine Zidane.

Manchester United and Chelsea are just two of the teams reportedly interested in signing the 25-year-old, but James has no desire to leave.

He told Marca: "I will fight to earn my place. That's my dream. I will stay at Real Madrid, I will succeed here.

James joined Madrid from Monaco after impressing at the 2014 World Cup, but has seen his playing time gradually reduce and made just 26 appearances in LaLiga last term.

Zidane added fuel to the transfer rumours earlier this week when he admitted James' situation, like others, was "complicated" due to the size of Madrid's squad.

The Madrid coach said: "The idea with James is the same as with everyone else - he's a Real Madrid player.

"I'm not going to tell you that James is a starter. He's an important player. We'll see what happens this year, I have a big squad and it's complicated.

"I have to play the most competitive side I can and I'll do the same thing this season, that's my responsibility."