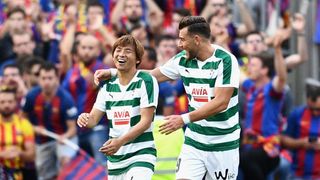 Eibar attacker Takashi Inui became the first Japanese player to score against Barcelona in a LaLiga match after hitting the opening goal in Sunday's match at Camp Nou.

With Barcelona needing to win to have any chance of overhauling leaders Real Madrid at the top of the Liga table on the final day of the season, Inui gave his side a shock lead.

The Japan international was in the perfect position to tuck home a first-time shot from Ander Capa's right-wing cross to put a dent in the slim title chances of Luis Enrique's team.

Inui's second league goal of the season wrote his name into the record books, with the 28-year-old breaking new ground for Japanese players in LaLiga.

1 - Takashi Inui has become the first Japanese player to score against Barcelona in La Liga history. Katana. May 21, 2017