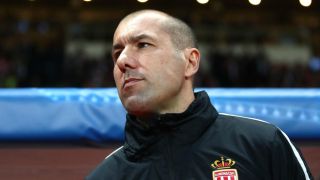 Leonardo Jardim said Monaco are down on confidence amid their three-match winless streak as his side face a must-win clash against Besiktas in the Champions League.

Monaco welcome Turkish visitors and Group G leaders Besiktas to Stade Louis II on Tuesday, having lost two of their past three games in all competitions.

The Ligue 1 champions conceded a stoppage-time goal as they lost 3-2 at Lyon last week to slip six points adrift of Paris Saint-Germain in France, while Jardim's men have only collected one point from their two Champions League fixtures.

"You cannot be champions of France every year. But for the players who arrive it is harder. When you arrive at the French champions, everyone has dreams.

"The problem is that they lack the confidence to do things well. We must remain at the level of champions of France. Sometimes you're down, but you have to work to get back, that's life.

"It will be a key game. We need to win to qualify. If we do not win, first place will be difficult to reach and we will probably have to aim for the second."

"The most difficult thing is juggling the league and the Champions League. There are only five or six clubs in Europe capable of performing in both competitions every season," Jardim told UEFA.

"This is my fourth Champions League campaign. The team and I know very well that every match is tough. It's a competition where you are punished straight away for the slightest mistake. So in the Champions League, you always need a team with a very good balance in the pitch.

"I'm a coach who likes to adapt to the players I have. Obviously, I always prefer attacking football. But depending on the players at your disposal, you decide whether you can be more aggressive going forward, more balanced, or more defensive. A good coach is able to get the best out of what he has available.

"Again, certain key players from last season have gone. But we have brought in some young talents. They still need to get their bearings at this level. That's normal. Some seasons are better than others. But in the end, we have always achieved our objectives."