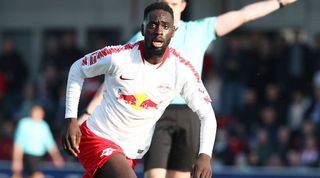 The Telegraph say that Everton and Leicester have made informal enquiries about the 21-year-old.

Augustin is reportedly edging closer to leaving RB Leipzig and is expected to depart after their DFB-Pokal final against Bayern Munich this month.

Everton are looking to add a body up front after Cenk Tosun fell out of favour at Goodison Park.

With Leicester facing a huge battle to keep Monaco loanee Youri Tielemans, they may well look to spend their money more shrewdly elsewhere.

Augustin has eight goals and two assists in 28 appearences this season and would be available for an estimated £17.4million.

Quiz! Can you name the most-used new player by every Premier League team in 2018/19?

Can you name the 30 most recent clubs to win the FA Cup?