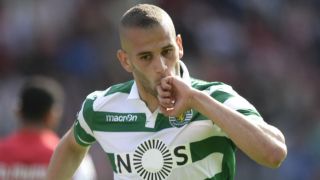 Following a prolific Primeira Liga campaign in which he scored 27 goals in 33 appearances, the Algeria international has been linked to Premier League trio Leicester City, Arsenal and Tottenham.

The striker has a buy-out clause in his contract - due to expire in 2020 - which would force Sporting to accept any offer of €30m.

Jesus is hoping the 27-year-old can be retained, but suggested he would be well worth the cost written into his deal.

"I would like for Slimani to stay. This area is for the president. The coach also has a say, and he [the president] knows my opinion," Jesus told SIC Noticias.

"I know it's important that Slimani continues, but also that it is important to sell a player for 30 million euros. Sporting is not used to making these deals.

"At present, 30 million for a player like Slimani is nothing."