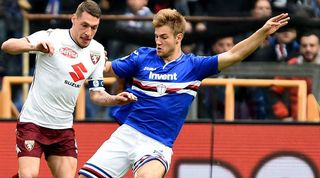 Toby Alderweireld is entering the final year of his contract at White Hart Lane, and he has a £25 million release clause which could be activated this summer.

As such, Spurs could well be on the hunt for a new centre-back before long – and Danish prospect Joachim Andersen could fit the bill.

According to the Daily Star, Andersen has been priced out of a move to Spurs' north London rivals Arsenal after they were quoted £31.2 million.

However, it's believed that the 23-year-old has also been offered to Spurs.

Andersen started 32 games in Serie A last season as he begins to assert himself in the top-tier of Italian football.

It's reported that Juventus, Napoli and AC Milan have also been offered the player.