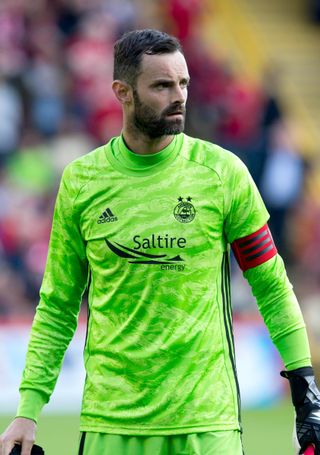 Aberdeen captain Joe Lewis aims to grasp the opportunity to play four games in 11 days following a difficult period for the club.

The Dons have had three matches postponed after eight players were instructed to self-isolate after two tested positive for Covid-19 following a night out that breached guidelines and sparked criticism from Nicola Sturgeon.

Before then, the Dons can begin to move on from the furore when they take on St Johnstone at McDiarmid Park on Thursday in a rearranged game.

They then face Livingston on Sunday, their Europa League opening qualifier against Welsh side Barry Town or NSI of the Faroe Islands the following Thursday, and a trip to play Hibernian before the end of the month.

Lewis told his club’s Red TV service: “There’s been lots of difficult conversations. You never want to deal with this.

“The boys involved have made their public apology, they’ve apologised internally to the other players and to the staff, the club have dealt with it internally, and that’s drawn a line under it.

“Playing games is important now, to put things behind us and move on.

“We are very united as a group, everyone is sticking together and we want to show that out on the pitch too.

“The games are going to come thick and fast from here, it’s an even more congested fixture list than it already was, so hopefully everyone can all focus on the football again.

“We spent so long waiting for the football to come back, then as soon as it did, it was gone again, so now we are back, let’s grab hold of the games that are coming, make the absolute most of them, pick up results and bring the attention back to what we are all about as a club and as players.

“Four games in a short space of time before the international break, so it will be hectic, but we have enough good players here to cope.

“It’s now about the football, it is about the way we play and about hopefully getting good results, creating some positivity, giving the fans something to smile about and moving forward together.”

Lewis insisted Aberdeen had been keen to play their postponed fixtures despite losing the self-isolating players.

Last week’s visit of Hamilton and the weekend clash with Celtic were called off after Hoops defender Boli Bolingoli’s failure to heed quarantine rules exacerbated the pressure on football authorities following the Dons breach.

“There was definitely disappointment,” the 32-year-old said. “We were ready to play the game. The lads that are here have been training hard.

“It’s been difficult circumstances but the lads are always confident in any XI that the gaffer could have fielded that we still have a strong enough team to win games.”