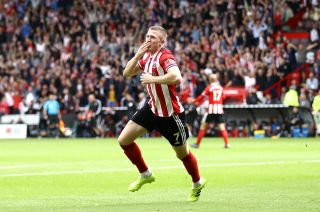 Back in the top flight for the first time since their relegation in 2007, amid the controversial Carlos Tevez affair, the Blades built on their opening-day draw at Bournemouth with three points on Sunday.

Lundstram fired home the decisive goal after 47 minutes and the majority of the 30,197 crowd responded with a noise to rock the foundations of the world’s oldest professional football stadium.

The hosts started with gusto and energy but were offered an early reminder of the pace of Premier League football when a Palace counter-attack resulted in Christian Benteke stinging the palms of Dean Henderson with a shot from a tight angle down the right side of the penalty area.

However, the visitors were often pedestrian in their build-up play thereafter, with Luka Milivojevic dropping deep to receive the ball and not being given a moment’s peace by the industrious Callum Robinson and David McGoldrick.

Wilfried Zaha, recalled to the Palace starting line-up after starting on the bench against Everton – who attempted to sign him over the summer – last weekend, was largely anonymous but for a couple of ill-advised exchanges with George Baldock, Blades boss Chris Wilder and the home fans.

After the early scare, things looked promising for the hosts. By contrast their build-up play was sharp and varied, with pin-point switches of play between the flanks.

Brilliant display from George Baldock in the first half 🔥👊— Sheffield United (@SheffieldUnited) August 18, 2019

Baldock was causing all sorts of problems for Palace down the right. Perhaps watching England manager Gareth Southgate was looking to nip in ahead of Greece, for whom the wing-back is also eligible due to his grandparents.

The Blades thought they should have had a penalty midway through the first half when an Enda Stevens’ shot looked like it struck the hand of Martin Kelly, but referee David Coote waved away the appeals. Shortly afterwards Baldock saw an effort deflected over the crossbar.

Injury forced off John Fleck after 29 minutes, with Luke Freeman replacing him, but the change did not affect the hosts, who looked dangerous again when Robinson controlled a long diagonal pass and shot over the bar.

Three minutes before the break, Vicente Guaita made a point-blank save to deny McGoldrick from six yards out after Lundstram had found the striker with a low, curling cross.

It was a glaring miss, but United’s big moment was not far away as Wilder’s team resumed after half-time where they had left off.

Following good play down the left from Jack O’Connell, Freeman cut into the penalty area. His low shot was parried by Guaita, but he could only push the ball into the path of Lundstram, who steered his effort home from eight yards.

Palace replied with a curling attempt from Andros Townsend which Henderson had to push away to safety.

Chances became less frequent for the Blades after the goal as the game became a little fractious. Baldock and Palace substitute James McCarthy were both booked after a confrontation in the 74th minute.

O’Connell saw a far-post header blocked by Guaita, while club-record signing Ollie McBurnie tamely looped a header onto the roof of the net.

But Palace were not creating anything either, and the hosts comfortably saw out the match.