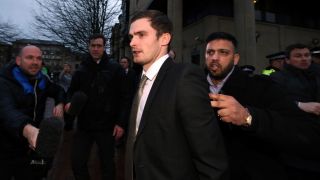 Former England international Adam Johnson has lost an appeal against his conviction for child sex offences and a six-year prison sentence, the 28-year-old’s sister Faye has revealed.

The ex-Sunderland winger was sentenced in March having been found guilty by a jury of one charge of sexual activity with a 15-year-old girl at Bradford Crown Court.

Johnson, who pleaded guilty to a lesser charge and one of grooming, filed an appeal against that conviction, but his attempt to have the judgement overturned has now been rejected.

"Absolutely devastated that the single judge has rejected my brother's appeal against sentence and conviction," Johnson's sister tweeted.

"But I can assure every supporter that it has made me stronger and I will never give up. I will keep everyone posted as to the next steps.

"Also my appeal page has been temporarily removed but will be back up and running very soon with the link to my website.

"Thank you to everyone for your continued support daily it means a lot and keeps me going."

Johnson had his contract terminated by Sunderland after his guilty plea.