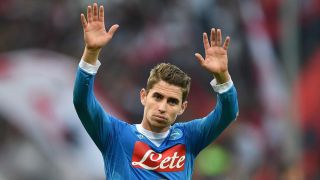 Jorginho will join Manchester City if Napoli accept an offer, according to the Italy midfielder's agent.

The 26-year-old has two years remaining on his contract at the Stadio San Paolo but his superb performances as Maurizio Sarri's side pushed Juventus in the Serie A title race have reportedly caught the eye of Pep Guardiola.

City's manager told Sky Sports earlier this week he is in the market for two players this close-season – a deep-lying midfielder to replace the outgoing Yaya Toure and another forward.

Jorginho fits the former bill and his representative Joao Santos says he would be keen on linking up with the Premier League champions.

"At the moment, Jorginho is still under contract but if Napoli were to reach an agreement with City, the player will go to Manchester," he said, as quoted by ESPN.

"Agreeing terms with the English club won't be a problem, given how big a club they are. But, like I say, it depends on Napoli now, considering the player is contracted to them for a further two years."

Nevertheless, Santos - who earlier this month claimed "four or five" Premier League clubs were interested on his client - was keen to point out Jorginho will not look to force through a move if Napoli decide not to sell.

"City are English champions and they are among the best clubs in Europe. We just need to remain calm and if Napoli and City reach a solution, we can talk about it, otherwise the player will be happy [to stay] at Napoli."

"At the moment, I've not heard from any of the Azzurri's management because I imagine they are caught up with planning for next season. I hope to hear from the [sporting] director and maybe I will go to Naples in the next few days to discuss it with him."

The Brazilian-born playmaker joined Napoli from Verona in 2014 and has been capped five times by his adopted country, starting each of Italy's past three matches.

Jorginho played against City this season, with Guardiola's men running out 4-2 winners in a thrilling Champions League clash in Naples last November.