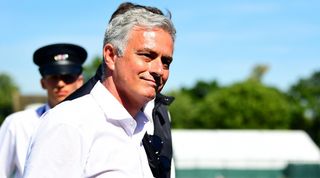 There were reports in Germany this week that the former Manchester United boss had started to learn German and was keeping in regular contact with Dortmund.

Lucien Favre is currently in charge at Westfalenstadion but has come under some pressure after a stuttering start to the season.

Dortmund are currently fourth in the Bundesliga, having picked up just two wins in their last seven games in all competitions.

But Zorc responded strongly to the suggestion that Mourinho could be on his way to BVB.

"We are not having a coach discussion and are happy to have Lucien Favre,” he told Sky in Germany, as reported by the Mirror.

"These rumours around Mourinho lack any substance.”

Despite being fourth in the Bundesliga, Dortmund are just one point behind leaders Borussia Monchengladbach in a very congested table.

They were beaten 2-0 by Inter Milan in the Champions League on Wednesday at San Siro and are currently third in Group F, behind the Italians on head-to-head record.

Favre arrived at Dortmund in the summer of 2018 and led the club to second place in his first season in charge, finishing two points behind champions Bayern Munich.

The former Nice boss has a contract with the German giants until 2021.

Mourinho has been out of management since being sacked by United in December 2018, working as a pundit in the meantime.