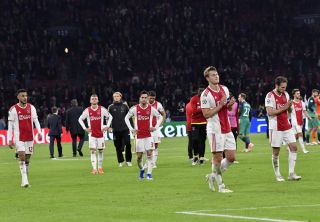 Jose Mourinho has accused Ajax of naivety after their Champions League collapse against Tottenham.

Ajax’s ambitions of meeting Liverpool in the June 1 final were destroyed as Spurs staged an extraordinary second-half revival in Amsterdam on Wednesday, overturning a 3-0 aggregate deficit to progress on the away goals rule.

Mourinho, a Champions League-winning manager with Porto and Inter Milan, said Ajax’s philosophy was trumped by Tottenham’s strategy at the Johan Cruyff Arena.

And the Portuguese criticised them for treating the second half as if they were “playing against Vitesse in the Dutch league”.

“Every team grows up, you need that base, you need that philosophy, you need that style of play adapted to the quality of the players,” former Chelsea and Manchester United manager Mourinho said in his role as a pundit with BeIN Sports.

“Ajax deserve all the credit for that and all the admiration of people like us who love football, and we give them the credit they deserve.

“You need sometimes to go against your philosophies to win a football match and I think if Ajax, in the second half, hide their weaknesses better, but everybody knows their weaknesses, they have to cope with that.”

Ajax started their Champions League campaign over nine months ago on July 25, with a 2-0 win over Austrian outfit Sturm Graz in the second round of qualifying.

Erik Ten Hag’s side became the first to reach the semi-final of the competition after playing in three qualifying rounds, and thrillingly humbled holders Real Madrid and Juventus in the knockout stages.

Barcelona-bound Frenkie De Jong, teenage captain Matthijs De Ligt and the Brazilian winger David Neres emerged as stars during the tournament, but there are fears now that the side will be dismantled with bigger clubs willing to sign their best players.

“My thoughts are that we thought Ajax had achieved a certain level of maturity, and they didn’t,” Mourinho said.

“They showed in the second half that there is still naivety in that team, and I think that the philosophy lost against the strategy.

“The philosophy brought Ajax to a disposition of playing fantastically well and arriving with one and a half feet in the final, but then the strategy won.

“We saw many examples in their attacking situations, we had other situations where (Daley) Blind and De Ligt were outside. The basic thing you do when you have an advantage is to keep your balance all the time, never imbalanced.

Heartbroken 💔 but this is the game we all love & it has been an unforgettable @ChampionsLeague campaign! ✖️✖️✖️ We must remember our season isn't over yet, 2 finals to go for the league title & focus will not be lost now 👊🏿 @AFCAjax#UCLpic.twitter.com/SI52Qakq9W— Andre Onana (@AndreyOnana) May 9, 2019

“The balance starts with the defensive line in position and after that a certain number of players always behind the ball.

“But they stuck with their philosophy, they played the second half like they were playing against Vitesse in the Dutch league.

“They played like it was a group-phase game, or one more game in their own league.”

Louis Van Gaal, another former United manager who guided Ajax to Champions League glory in 1995, was also critical of the way his former club surrendered the initiative against Spurs.

“This defeat was completely unnecessary,” Van Gaal was quoted as saying by Dutch newspaper De Telegraaf.

“At half-time there was nothing wrong with a 2-0 lead.

“Ajax made the wrong choices in possession of the ball in that phase.”