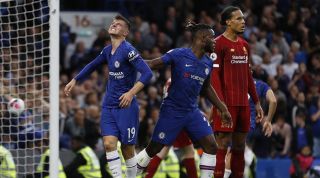 Jose Mourinho has warned Chelsea that they will no longer be considered a giant if they start accepting defeats.

The Blues were beaten 2-1 by Liverpool in the Premier League on Sunday, following a midweek loss to Valencia in the Champions League.

Despite the narrow reverse against Jurgen Klopp’s side, Chelsea fans reacted positively to their team’s performance.

But Mourinho believes that supporters must maintain high standards if the Blues are to remain a major force in English football.

“I hope they don’t get used to it. That’s a very important thing,” the Portuguese, who won three league titles at Stamford Bridge, told Sky Sports.

“When you start accepting defeats just because your team played well and just because your players gave their best and they had a performance for people to be proud of in terms of that attitude and commitment… I think when you get used to it is when the big clubs stop to be big clubs.

“So I don’t think they get used to it. But I think it shows that people are ready for what this season is going to be for them.

“These people are ready to support one of the best professionals I have ever worked with and a manager with potential and I think they’re ready to accept what this season is going to be.

“So let’s make it clear and objective: Chelsea is not going to fight for the title. So let’s support what looks like is their philosophy which is to give time for the team, for the players, for the manager, to grow together.”

Chelsea will be looking to return to winning ways when the host Grimsby in the EFL Cup on Wednesday.