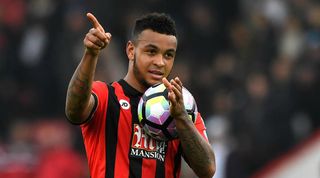 Josh King admits he was disappointed that a proposed move to Manchester United did not go through in the final days of the January transfer window.

The Norway international moved to Old Trafford as a 16-year-old in 2008 but only ever made two first-team appearances for the club.

The Bournemouth forward was linked with a return to United last month before Ole Gunnar Solskjaer completed the loan signing of Odion Ighalo from Shanghai Shenhua.

And although King insists he is happy on the south coast, he says it would have been a "dream come true" to join the Red Devils for a second time.

"How close it was I have no complete answer to," he told TV 2.

"I have to watch what I say. I had some faith that it was going to happen. And it was a bit sensitive for me considering that I moved to England as a 16-year-old to achieve my dream and wanted to reach that goal at Manchester United.

"It did not [happen] and then I made a choice and left. When you hear that you are connected to United and a bid comes in, then the feelings you had as a 16-year-old come back to you. But why it did not happen, I do not know.

"I’m a Bournemouth player and I really enjoy it here. But it had been a dream come true, I will not lie," he added.

"But that didn’t happen and I’m going to give everything to Bournemouth as long as I’m in this club. The coach [Eddie Howe] was absolutely fantastic with me during those days and was very helpful with me.

"I have respect for how he behaved with me during the little episode. So I just have to keep working hard to try to help the club out of the situation we’re in now."

King made his 17th Premier League appearance of the season as Bournemouth lost 2-1 to Sheffield United on Sunday.