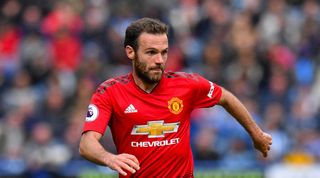 Manchester United midfielder Juan Mata has called on everyone involved with the club to unite against external forces.

Ole Gunnar Solskjaer's side beat Leicester 1-0 on Saturday to move up to fourth in the Premier League table.

The Red Devils have not won the title since 2013 but they remain English football's most successful club with 20 championship crowns to their name.

And Mata has called for togetherness as United attempt to qualify for next season's Champions League.

“If we want to get our objectives, we need to stick together – managers, players and fans – because there's many people on the outside enjoying it when Manchester United don't win,” he said. “It's key for us to stick together as a whole.”

Solskjaer has demonstrated a willingness to give young players a chance during the first nine months of his tenure.

And Mata believes United have numerous talented prospects within their ranks.

“I very much like them,” the playmaker added. “I could speak about every one of them.

“Jimmy Garner I like very much. Composure, personality on the ball, good shot, good decision-making. He touches the ball just the times he needs to. As a midfielder that's important – not just to retain the ball a lot, but to make it move quicker, and he does it so much.

“Mason [Greenwood] is a very good finisher, both legs. You can't really tell if he's right-footed or left-footed, which is a very good quality for a striker.

"All of them have been training with us for a long time and they developed a lot in pre-season. Football is not about age. Even for me. I'm now 31, but I don't think I'm old for football.

“I feel very young in my mind, in my legs. So football is not about age. It's about quality and the capacity you have to show it.”

United face Astana in the Europa League on Thursday, before a trip to West Ham this weekend.