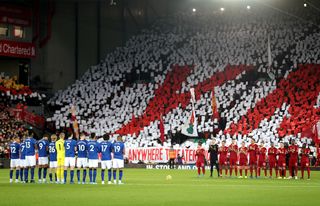 Liverpool manager Jurgen Klopp is confident his champions elect will hit the ground running on their return to competitive action even if he admits football is not like “riding a bike”.

When the Premier League leaders kick off the 236th Merseyside derby at Everton on Sunday night it will have been 103 days since their last outing – their Champions League exit at the hands of Atletico Madrid.

They require just two wins to guarantee a first top-flight championship since 1990 and while Klopp is confident they have done everything possible to get them back up to speed he accepts that will only really be tested in the heat of a derby at Goodison Park.

Prior to the break Liverpool had, uncharacteristically, lost four out of six matches – their first league defeat of the season, two matches in the Champions League and the FA Cup – so they need to show that was a blip as they seek to secure the title.

“In nine weeks not doing anything you can lose almost anything. The players trained every day but we don’t train them for a specific moment as we had no idea until a week before that training would start again,” said the Reds boss.

“Training is completely different if you just want to keep fit or be in the best shape for a specific day. We kept them fit until we knew until we go again and the boys don’t lose a lot.

“Unfortunately it is not like riding a bike. We have to bring 11 or more players together to have the same idea in the same moment.

“A lot of things are still there but timing needs to be adjusted so I expect us to be in a good shape.

“I don’t know if we are 100 per cent but Everton have had the same time. It is all about being ready to face problems in a game and finding solutions.

“Everton will be highly motivated. Starting a derby in a normal season would be interesting, and now it is our short season it is very interesting.

“It is a special game for different reasons.”

Mohamed Salah, who sat out last week’s behind-closed-doors friendly with Blackburn, was pictured in Liverpool’s Friday training session in a pre-match boost to Klopp.

In fact the only player unavailable is Xherdan Shaqiri, who has not played since January due to a calf problem.

While the Swiss schemer’s Anfield career has foundered over the last 12 months, January arrival Takumi Minamino has benefited from having extra training time with the squad.

“Look, a new player is coming in and usually, how it is with us especially, you say, ‘Come on, the first two, three, four months you don’t really judge’,” added the manager.

“And the more time you have, for whatever reason, the better it is and now we had four weeks (of training) which is, by the way, the longest pre-season I ever had with any Liverpool side together.

“So yes it helped and Taki, 100 per cent. He looks really different in the moment to the first three weeks when he tried to please everybody and do everything that we say, and that’s in a language he is not 100 per cent comfortable with.”

Nevertheless, at best the Japan international and former RB Salzburg forward will have to settle for a place on the bench as Liverpool look to extend their record-breaking 18-match unbeaten run against their near neighbours.