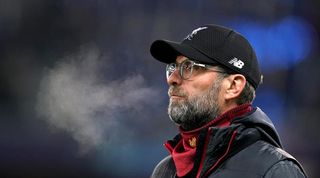 Jurgen Klopp has compared joining Liverpool to the moment he first met his wife.

The former Borussia Dortmund boss moved to Anfield in October 2015, taking over from the recently departed Brendan Rodgers.

The German has enjoyed tremendous success on Merseyside since then, winning the Champions League last season and leading Liverpool to the top of the Premier League table this term.

The Reds are currently 22 points clear at the summit of the standings as they close in on a first title since 1990.

Klopp has developed a wonderful rapport with the club's supporters during his four and a half years at the helm.

And the 52-year-old says the thrill of taking charge at Anfield was similar to when we first met his second wife Ulla.

"There was a lot of interest, I had to make a holiday first," Klopp told Sky Sports of his move to Liverpool.

"I heard from my agent that Liverpool is interested and I felt immediately 'oh god', it's like when I met my wife - I saw her and thought okay I marry her and it was like that with the club. It felt right from the first moment.

"I liked England before I lived here because when I was 18-years-old I was here for five or six weeks by train, interrail. My cousin wanted to come (to England), we were just bed and breakfast, had a tent, from time to time we were on a camping ground.

"The weather was unfortunately really sh*t though. We did not use the tent too often because it was that wet, but bed and breakfast I loved.

"It was such a wonderful thing, so you had contact with people you usually don't have.

"You travel through a country, you meet all kinds of generations, some elderly people who were always really nice so that time I thought one day I want to live for a while in England."

Liverpool host West Ham in their next Premier League game on Monday.