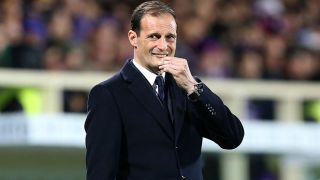 Serie A champions Juventus begin their pre-season preparations against Melbourne Victory with the future of their prized asset still up in the air.

Paul Pogba remains on vacation after helping France to the final of Euro 2016, but the midfielder being heavily linked with a world-record move to Manchester United has acted as a sustained backdrop to Saturday's opening match in the Australian leg of the International Champions Cup at the Melbourne Cricket Ground.

The iconic venue will stage three matches in the space of seven days, with Juventus moving on to tackle Tottenham before Mauricio Pochettino's men face Atletico Madrid.

Juve boss Massimiliano Allegri told a pre-match news conference that he is confident Pogba will remain in Turin and he is eager to begin working with an impressive raft of new recruits, including Dani Alves, Miralem Pjanic, Medhi Benatia and Marko Pjaca.

"Tomorrow's match against Melbourne Victory will be very useful for us as far as fitness is concerned," said Allegri, who is full of respect for Juventus' opponents.

"Victory have won three titles and so we will need to approach the game in the correct manner.

"There will be opportunities for a lot of the boys to get some game time, even some of the younger lads."

"Not having to sell top players speaks highly of the club. We have spent many years playing together," he said.

"The core of the team remains the same and that makes us play virtually memory. It is clear that we have the icing to keep winning titles and now we will keep fighting for it."

Atletico are likely to face an experimental Tottenham line-up, with Pochettino naming a host of youngsters in his squad for the trip, although new signings Victor Wanyama and Vincent Janssen are set to feature.

"We all know that this season will be even harder with the Champions League, we want to do well in the Premier League again and that's why we need a good pre-season," said Spurs defender Kevin Wimmer, who signed a new contract this week, on the club's official website.

"It has to be tough in this period but at the end I think it will help us."