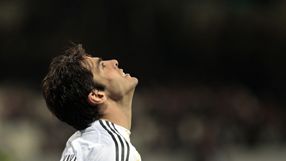 Kaka, who needed knee surgery after the 2010 World Cup and missed the first half of the season, was unable to train on Saturday and joins Cristiano Ronaldo, Sami Khedira, Fernando Gago, Alvaro Arbeloa, Ezequiel Garay and Gonzalo Higuain on the medical list.

Coach Jose Mourinho told a news conference on Saturday it was better for Kaka, who has struggled to regain the form that won him a World Player of the Year award in 2007, to get properly fit before playing again.

"He is limited in his movement and agility and his condition on the pitch and he is not happy when he doesn't feel on top form," the Portuguese said.

"The medical department decided it was better to return only when he feels absolutely fine and I prefer it that way.

"It's not positive for the team or the player if he doesn't feel at 100 percent."