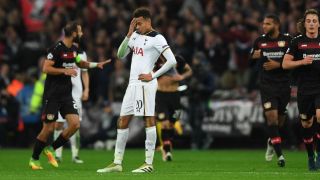 Tottenham's 1-0 defeat at the hands of Bayer Leverkusen on Wednesday served to extend a lengthy list of Champions League Wembley woes for English clubs.

Kevin Kampl's 65th-minute goal proved enough to secure all three points for the Bundesliga side, who leapfrogged their opponents into second place in Group E.

And although an English club home record crowd of 85,512 was in attendance, the other Wembley-related stat proved far less positive for Spurs.

The 1-0 loss for Mauricio Pochettino's men, playing at Wembley as a result of White Hart Lane's capacity being reduced due to the building on a new ground next door, marked the ninth time in succession that an English side has failed to keep a Champions League clean sheet at the national stadium.

It leaves Spurs, who lost their first group game at Wembley 2-1 to leaders Monaco, two points behind Leverkusen with two games to play.

0 - No English side has managed to keep a clean sheet in a Champions League game played at Wembley Stadium in nine attempts. Woe.November 2, 2016