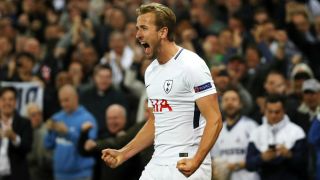 Tottenham star Harry Kane revealed he used Cristiano Ronaldo and Lionel Messi as motivation to be among the world's best.

Kane, 24, has made another bright start to the campaign with six goals in seven games in all competitions.

The England international has reached the 30-goal mark in two of the past three seasons and netted 28 in the other, leading to discussions over where he stood among the world's best forwards.

"I use it," he told UK newspapers.

"With social media these days it's difficult to stay away from it.

"I want to be one of the best players in the world, so when people put it up and I see I am close to those players, it is a great incentive to get closer and go to the next step."

Kane was labelled a one-season wonder after his 21-goal Premier League campaign in 2014-15.

But he has proven those critics wrong and the forward, whose team visit APOEL in the Champions League on Tuesday, said he was only getting better.

"It's kind of down to growing up, getting older and more mature, filling out in my body," Kane said.

"I feel stronger holding off defenders maybe better than I was before. I eat well, I recover well. That is what it is all about.

"Your football career is a short career so you have to make the most of every week and every day. That is what I try and do and when I am old enough to retire and go and play golf that is what I will do.

"At the moment it is just about using every day, especially with the amount of games we play, to recover, eat healthy and go from there."