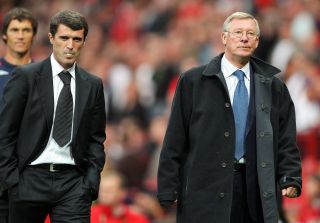 Ferguson tempered his praise of Keane as a player with criticism of the Irishman's fiery temper and strained relationship with his team-mates.

The Scot wrote in his book, Alex Ferguson: My Autobiography, that Keane could "debilitate the most confident person in the world in seconds with that tongue.

"I think the dressing room relaxed when Roy left. Relief swept the room. They no longer had to listen to the barrage that some of them had grown to expect."

However, Keane hit back at his former manager.

"We used to have a lot of conversations about loyalty - in my opinion he doesn't know the meaning of the word," he said while acting as a pundit on ITV Sport.

"It doesn't bother me too much what he says about me, but to constantly criticise other players at the club who brought him a lot of success, I find that very strange.

"I'm not sure how many books he's written now but you have to draw a line. All these players have been top servants at United and a lot of these players won a lot of trophies. Can you imagine if we had never won a trophy what he would have said? We brought success to the club, we gave it everything we had when we were there.

"I certainly won't be losing any sleep over it."