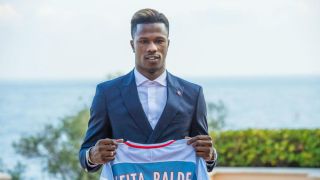 Keita Balde has stressed he is not arriving at Monaco as a direct replacement for Kylian Mbappe and hopes to be judged on his own qualities rather than being compared to their former star.

Keita swapped Lazio for Ligue 1 in the closing days of the transfer window for a reported fee of €30million, the Senegal international signing a five-year contract.

The 22-year-old, a product of Barcelona's La Masia academy, enjoyed a prosperous four years in Rome before moving to Monaco – snubbing advances from Juventus and Inter.

He arrived at Stade Louis II in the days before Mbappe's protracted departure for Paris Saint-Germain, but insists he is not there to fill the void left by the 18-year-old.

"I do not know Kylian Mbappe personally but I know he is a very good player," the forward said at media conference on Thursday.

"I am not here to replace him. He has his style of play and I have mine."

Keita could make his Monaco debut this weekend when Leonardo Jardim's side travel to neighbours Nice on Saturday.