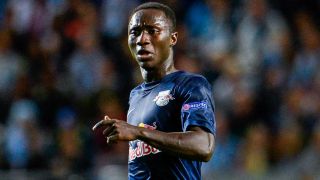 RB Leipzig have put speculation "to bed" and declared they will not allow Naby Keita to join Liverpool in January.

The two clubs struck an initial deal in August regarding a future move to Anfield for Keita at the end of the 2017-18 season.

Back then, Liverpool reportedly triggered a £48million release clause which is due to become active on July 1, 2018, while they are also said to have paid an extra £7m in order to secure the transfer a year in advance and loan him back.

Following the sale of Philippe Coutinho to Barcelona and with Liverpool reportedly eager for midfield reinforcements as they bid to qualify for the Champions League, an attempt to bring Keita to Anfield six months early had been speculated about.

OFFICIAL: Naby will remain an player until 30th June 2018. We wish to put the speculation about a January move to to bed. January 14, 2018

It had been suggested that Liverpool were considering paying a further £18m in order to bring Keita to the Premier League in January, but the German club have taken the decision to make an official announcement that he shall remain in Leipzig.

Writing on their official Twitter account, Leipzig declared: "Naby Keita will remain an RB Leipzig player until 30th June 2018. We wish to put the speculation about a January move to Liverpool to bed."

Leipzig sporting director Ralf Rangnick confirmed that Liverpool had expressed a desire to bring Keita's move forward, but he reiterated that the Bundesliga side intend to put their foot down.

He said: "We won't allow Liverpool to sign him early, even though they have shown renewed interest to bring him in during this transfer window."

Ralf : "We won't allow to sign him early, even though they have shown renewed interest to bring him in during this transfer window." January 14, 2018