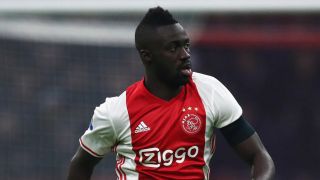 Sanchez is expected to become Spurs' club-record signing, with a deal worth £42million reportedly having been agreed for the centre-back.

The Colombia international was left out of the Ajax squad for their Eredivisie defeat at Heracles on Saturday and their home loss to Rosenborg in the Europa League on Wednesday as speculation about his future continues.

And while Keizer believes Sanchez will move on before the closure of the transfer window, the Ajax coach says stars including Kasper Dolberg, Hakim Ziyech and Justin Kluivert will stay.

"It seems Sanchez leaves, but I assume that everyone else remains," Keizer said. "After last night, I have heard nothing, negotiations will continue.

"Of course, you would rather have clarity around your players, but it's no excuse [for back-to-back defeats].

"I would like to keep the group together, but if there is a big club with a lot of money, the player also has his say."

Spurs manager Mauricio Pochettino was asked about the potential signing of Sanchez on Friday but he opted not to confirm the Premier League club's interest in the defender.

"I cannot speak about him because he's not our player," Pochettino told reporters on Friday. "He's a player in another club.

"Like always I fully respect everyone from every club and every player - I never speak about rumours. We expect to sign some players before the end of the transfer window.

"That is our aim - to try to improve our squad and try to bring new faces and new energy to the team because it will be a long season."