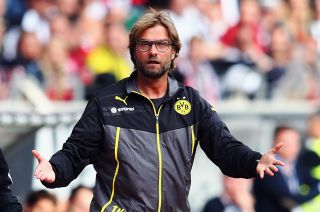 Arsenal brought in Germany international Ozil for a club-record fee from Real Madrid on transfer deadline day, with Bale moving to Madrid for a world-record sum a day earlier.

While Dortmund suffered from their own financial problems as recently as 2005, Klopp believes excessive amounts of money are being spent by Premier League clubs such as Arsenal.

"In Dortmund earlier, sometimes insane amounts of money have been spent," he told Bild.

"But what's going on in England is crazy."

Speaking about Ozil's move to the Emirates Stadium, he continued: "It's not so often that €50m is pushed at the last minute over the counter.

"Mesut is a grenade. No one knows why he was sold. Maybe Real need money."

As well as selling Ozil, the La Liga giants broke the world transfer record to bring in Bale from Tottenham.

Klopp feels the transfer fee is "insane" and questioned Real president Florentino Perez's decision to spend such a large amount of money on the Welshman.

He explained: "It is not important, what a player costs.

"The question is: do you really want it and can you pay him?

"The sums are madness, but they remain in the football circuit. Real president Florentino Perez had committed to signing Bale just paid 100 million."