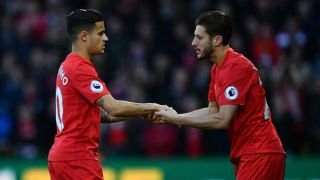 Jurgen Klopp confirmed that Philippe Coutinho sustained a dead leg in Liverpool's 1-0 win over Watford and is hopeful the injury is not serious.

The Brazil playmaker was hurt during a clash of legs with Adrian Mariappa in the early stages of the contest at Vicarage Road and had to be replaced by Adam Lallana, who himself was returning from a five-week injury absence.

Coutinho was later seen with heavy strapping on his thigh as the Reds secured a vital three points in their top-four ambitions in the Premier League courtesy of a sublime Emre Can bicycle kick.

Speaking at a news conference after the game, Liverpool boss Klopp provided an update on Coutinho's condition.

"Hopefully it's not too serious but of course it's really painful and there was no chance [he could continue].

"Everybody could see he tried hard, but no chance."