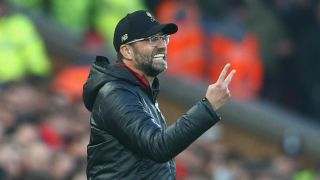 Liverpool manager Jurgen Klopp claimed he will not think about a Champions League meeting with Bayern Munich until February.

The Reds are flying high in the Premier League, having extended their cushion at the top of the table to six points on Boxing Day with a 4-0 thumping of Newcastle United at Anfield.

With reigning champions Manchester City faltering, Tottenham have moved up to second place as Liverpool seek their first title since the formation of the Premier League.

And Klopp will not allow an upcoming last-16 tie against Bundesliga giants Bayern to take focus away from his side's charge.

"Bayern is the strongest rival for Liverpool because that is our opponent in the next round," Klopp told a news conference.

"If you ask me for a favourite, Juventus is the team everybody has to beat, not only because Cristiano [Ronaldo] is there, but as well as that.

"[They are a] very experienced team, but thank God I don't have to think about the Champions League until February! It feels good, but in February we will be ready for that."

An eighth successive Premier League win also brought up Klopp's 100th victory since taking charge of the Reds, the German becoming the club's third fastest boss to reach the landmark.

Yet Klopp feels there are still improvements to be made despite Liverpool romping to victory and taking full advantage of a shock loss at Leicester City for Pep Guardiola's champions.

"I liked the start offensively but I didn't like the start defensively," Klopp continued.

"The protection was not how it should have been, we were not as compact as we should be, the first corner they had half a counter, stuff like that.

"It looked like kind of an open game. After the first 15 minutes we were good. But we lost the formation, we were too wide offensively. If you play the ball in behind then good, but if they could clear it with the header, we were not there.

"I was happy about half-time, that we could adjust a few things and get back to the way we actually we wanted to play. That made life easier.

"Second half we scored pretty early on and then we controlled the game and scored wonderful goals, set-piece [was] fantastic and then even Ali [Alisson], apart from all his football playing skills, showed what his actual job is and saves a clean sheet.

"So, a pretty perfect day for us, not a perfect performance but a really good performance."