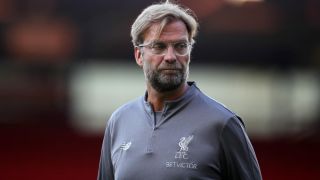 Liverpool manager Jurgen Klopp knows he is under pressure to deliver silverware after the club's lavish spending in the transfer market.

Klopp's Liverpool reached the Champions League final and finished fourth in the Premier League last season, and the Reds have invested heavily ahead of the 2018-19 campaign.

Alisson became the most expensive goalkeeper in history after joining from Roma, while Liverpool also spent significant sums to lure Naby Keita, Fabinho and Xherdan Shaqiri to Anfield.

Asked if Liverpool – in the United States for the International Champions Cup – need to win a trophy this season, Klopp said: "You are right and people will say that. It is the next step.

"It would be the next step and we need to be ready for that. I cannot give guarantees here but I understand if people think that. I know about the expectations and that is completely normal. First of all we have to play the football that gives us an opportunity to win something. We cannot talk about winning something before we start the season.

"Football is not like cycling so we have lost a lot of things. The other day I put on a session and had to stop it and start again. I was: 'Four players, one row, that's how we defend.' It's not that the boys wanted to do it a different way but there's a big change at this moment – new players coming in from another club, players in after a long time out; you are starting new more or less. When you have the complete team together you can build on the basis a little bit more.

"I am confident we can build on last season. It's not that we lost things completely but you have to work on it to get it back. The football the boys played last year was not easy. There was a lot of work invested into playing like that. That's what we will do again. I am not in doubt about our basis or that we will reach it again.

"I am in for the start of a third season and in each season there was one period when people questioned me or our progress. In the end it was OK. I am prepared for these moments. I don't want to have them but I don’t go nuts in these moments. We need to work with the different situations of the players. The new players will make us stronger 100 per cent. How? By starting, coming from the bench, the depth of the squad, whatever. We will see that but it does not happen on the first day."

Klopp added: "Other teams, of course, will do transfer business as well. They will not be weaker than last year. [champions Manchester] City brought in [Riyad] Mahrez. I did not hear that they lost one player so far. So it means the quality of last year plus Mahrez. That's a nice plan as well.

"[Manchester] United will go for it too and that's completely normal. We expect more from ourselves. We will go again for the championship and each kind of cup but that does not mean I can sit here and say we will get it. We have the highest ambitions, 100 per cent."