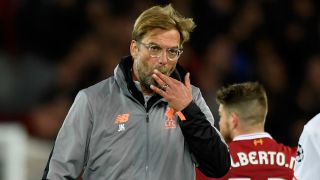 Jurgen Klopp insists Liverpool's profligacy in the 2-2 draw with Sevilla is "not an illness".

The Reds will see Wednesday's result in their Champions League opener as two points dropped after Roberto Firmino and Mohamed Salah had eclipsed Wissam Ben Yedder's opener to give them the lead.

Firmino fluffed his lines from the penalty spot, striking the post when he could have made it 3-1 before half-time, and Joaquin Correa ensured Sevilla claimed a share of the spoils at Anfield.

Asked if their wayward finishing may come back to haunt them after registering 24 shots to the visitors' seven, Klopp – who handed the returning Philippe Coutinho 15 minutes of game time off the bench – said: "If we shoot that often and don't score it's probably a problem, but I don't think it'll be like this.

Honours even at Anfield in 's first Champions League group-stage outing of the season. September 13, 2017

"Usually in a game like this you will score more than we did. So nobody should rely on it that it'll be like this. We know that we have to improve, but it's not an illness.

"We'll work on this how we work on all other parts of the game.

"I'm happy about a big part of the game. A lot of times when two good sides play against each other it's kind of boring, this was the opposite.

"The main reason for that was the desire and passion of my team.

"We had more chances and that's important that we created, even against a defensively organised side.

"A few players could not keep the levels from the first half. It's not a physical thing, it's a concentration issue. We see it. We're in a process and we'll have to work with them.

"There is a lot in this game we can build on."

Klopp spoke sparingly on Coutinho's return after the wantaway forward's transfer request amid heated interest from Barcelona, but did say he was happy to see him back.

There were two dismissals in the game, with Sevilla coach Eduardo Berizzo sent to the stands for twice throwing the ball away, while Joe Gomez got his marching orders at the death for a second yellow card.