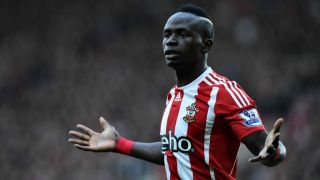 Louis van Gaal's interest in the 23-year-old was rebuffed during the previous transfer window but Koeman's decision to drop Mane for the defeat to Norwich City has reignited speculation of a January exit.

Koeman, however, says the punishment - issued due to Mane turning up late for a team meeting - is firmly in the past and says the forward is happy to stay at St Mary's Stadium.

"Mane is not in a different situation than last week. He's a Southampton player, he likes to play for Southampton, he's not for sale," Koeman said on Thursday.

"Of course I punished him because you have rules in the team, and it was a big mistake. He made his excuse to everybody and that's not behind us. The rest is internal discussions about how to handle these situations.

"He will start on Saturday, no problem."

Koeman dismissed the idea that Mane and Victor Wanyama - who was sent off for two reckless challenges against Norwich - have been angling for a transfer with their ill-discipline.

"It's too easy to mention after the mistake of Sadio, or the second yellow, that the players are showing that they like to move," he added.

"It's not like that. They know their position in the club and what we think. There's no reason to doubt that.

"If there's any player thinking that, if his behaviour is not good and that makes it more easy [to leave], then I'll put him in the stands before the end of the contract. That's not the way to do your job as a football player."

Southampton face Crystal Palace in the FA Cup on Saturday before home games with Watford and West Brom in the Premier League.

And Koeman is desperate to return to winning ways over the next week in order to avoid an uncomfortable second half of the season.

"We've had two defeats in a row after a great win over Arsenal. We need to win, to make the team stronger," he added.

"Crystal Palace are a very strong team but we can beat them.

"We have a big week coming up. We need points because, if not, it will be a difficult end to the season because we're close to the bottom teams.

"I'm more worried if we don't create chances, if we play bad football. Then it's really the moment to be worried about this season."