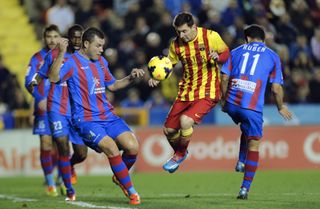 Gerardo Martino's men fell short of their usual high standards at Estadio Ciudad de Valencia, with Levante producing a fine defensive display to make it five unbeaten at home in all competitions.

Barcelona, who destroyed the same opponents 7-0 on the opening day, dropped points for just the fourth time this season with a second away draw on the bounce.

In a first half otherwise devoid of clear-cut chances, it was Levante who took a surprise lead when Loukas Vyntra headed home Andreas Ivanschitz's corner, before Pique equalised in almost identical circumstances from Xavi's delivery nine minutes later.

The visitors improved after the break, with Lionel Messi twice forcing Keilor Navas into smart stops, while at the other end Levante almost claimed all three points when Ivanschitz's superb 20-yard effort prompted a superb save from Victor Valdes.

The Catalan giants remain top ahead of Atletico Madrid's home match against Sevilla, while Levante move up to 11th.

Martin Montoya replaced the suspended Dani Alves at right-back for Barcelona, while full-back Juanfran started his 100th league game for the hosts.

Undeterred by the early setback, Barcelona continued to control the tempo and levelled in almost identical circumstances after 19 minutes, with Xavi's in-swinging corner headed into the far corner by Pique.

Barcelona were struggling to assert their usual free-flowing style as Levante's stubborn backline proved difficult for the visitors to penetrate.

It took until the 35th minute for Barcelona to have another chance of note as Xavi dragged wide from the edge of the box after neat interplay between Messi and Pedro.

The away side showed plenty of attacking intent after the break, with Pedro's 25-yard drive stinging the palms of Navas.

Messi played a one-two with Cesc Fabregas and saw his low shot saved by Navas, before Fabregas' follow-up was headed away by Juanfran to the Argentina international, who forced a superb reaction stop from the goalkeeper.

Barcelona were beginning to grow into the game and Messi once more found space in the box to have a shot blocked for a corner.

Levante twice came close to catching Barcelona on the counter-attack as first Pedro Lopez's volley was deflected for a corner by Jordi Alba, before Ruben Garcia's header from the penalty spot was well held by Valdes.

Ivanschitz's came even closer with just under 15 minutes remaining when he let fly from 20 yards and was only denied by an excellent stop from Valdes.

Both sides had chances in the closing stages, with Barcelona substitute Cristian Tello testing Navas with a curling strike from the edge of the box, before Garcia broke free of the defence at the other end only to shoot straight at Valdes.