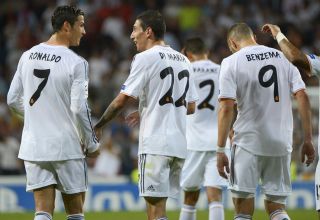 In their last four trips to the Estadi Ciutat de Valencia, Madrid have won just once, although that came last season courtesy of a 2-1 triumph, which was sealed by a late Alvaro Morata goal.

Prior to that, Real had not won - or even scored - on their previous three trips to face Levante.

A win will hold even bigger significance for Carlo Ancelotti after last week's 1-0 reverse at home to Atletico Madrid, Real's first league defeat of the 21st century to their city rivals.

But their spirits will have been lifted by a comfortable 4-0 victory over Copenhagen in the UEFA Champions League on Wednesday, sealed by doubles from Cristiano Ronaldo and Angel Di Maria.

The game also marked Raphael Varane's first appearance since suffering a knee injury against Espanyol in May and the France international, who also earned a recall to Didier Deschamps' national squad, was delighted to return.

He said: "I'm very happy. I went a long time without playing and I was on the pitch for the entire 90 minutes which was a real pleasure.

"I worked very hard over the past few days in order to achieve this.

"I feel physically quite good and from now on I hope to play well."

Varane's comeback is a timely boost, with Pepe's availability uncertain after he suffered a nasty head cut against the Danish side.

Xabi Alonso (foot) is definitely ruled out, while Gareth Bale (thigh) will also play no part.

Levante are in strong form going into the clash, having lost just once all season, although that defeat was by a 7-0 scoreline at Barcelona.

Since then, Joaquin Caparros' side have drawn four games and won twice, leaving them ninth in the Liga table with 10 points.

Pape Diop could be a doubt for the hosts after missing midweek training with a knee injury, but Caparros is positive over the condition of Baba Diawara and David Navarro after they recovered from a hamstring injury and illness respectively.