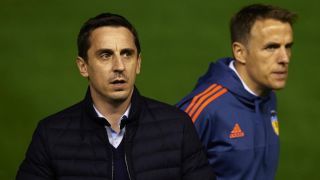 Pressure is growing on Gary Neville after Valencia once more failed to win in La Liga, with Sporting Gijon recording a 1-0 victory at the Mestalla on Sunday.

The former Manchester United man took charge of Valencia after their 1-1 draw with Barcelona in early December, but has since gone eight league games without a win.

Valencia's poor run of form has seen them drop to 12th place in the table with 25 points from 22 games, a massive 19 points off the Champions League places.

Neville's men fell a goal behind shortly after the interval when Antonio Sanabria converted a penalty to break the deadlock.

Alvaro Negredo hit the post shortly after, before wasting another huge chance with 15 minutes to play as Valencia ended up empty handed once more and their 22-match unbeaten home run was consigned to history.

Elsewhere Sevilla made it seven wins from their last eight games in all competitions as they beat Levante 3-1.

Kevin Gameiro opened the scoring in the first minute after some great work from Vicente Iborra, before the latter made it two early in the second half.

Giuseppe Rossi pulled one back for Levante in the 55th minute, but Yevhen Konoplyanka eventually made it three in the 76th minute to put the match to bed.