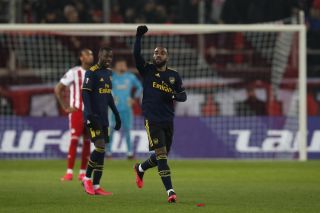 Arsenal have one foot in the last 16 of the Europa League after Alexandre Lacazette ended a frustrating night by tucking home a late winner at Olympiacos.

The France international ended a nine-game scoring drought off the bench against Newcastle at the weekend and returned to the starting line-up in Piraeus to hit the winner in a 1-0 victory for the Gunners.

Lacazette had earlier been guilty of missing the best chance of the night, before he turned home Bukayo Saka’s cross with nine minutes remaining.

Beaten finalists last season, Arsenal will now have a lead to defend in the round-of-32 second leg at the Emirates Stadium in a week’s time as their defence once again stood tall.

For a side shipping chance after chance under previous coach Unai Emery, this was a third consecutive clean sheet for an Arsenal team clearly shaping up better at the back with Arteta at the helm.

The Spaniard had promised to name a strong side and made five alterations from the 4-0 victory at home to Newcastle four days earlier.

One of those decisions was to retain Bernd Leno as Arteta opted against switching his goalkeepers for this competition.

That soon paid dividends as the Germany international was forced into action inside three minutes, getting down low to push out Mathieu Valbuena’s effort.

Arsenal had started slowly and escaped another couple of decent chances for the hosts before they started to get a foothold in the game.

But Lacazette spurned a glorious chance, firing wide when well-placed in front of Jose Sa’s goal after good work from Joe Willock and Gabriel Martinelli fashioned the shooting opportunity.

Leno was again on his toes to keep out what would have been an unfortunate David Luiz own goal after the defender diverted a low cross at the first-choice stopper.

There were few opportunities for either side after the break as the rain continued to fall, Lacazette unable to get enough contact on a header from a Granit Xhaka cross as the Gunners searched for an away goal.

Arteta turned to Dani Ceballos and club-record signing Nicolas Pepe in the hope of leaving Greece with a victory, but it would be Lacazette, who had left his manager visibly frustrated on a number of occasions throughout the night, who would strike.

Pierre-Emerick Aubameyang had been shifted across the front line as Arteta sought a winning formula and he rolled in Saka down the left, with the teenager providing yet another assist as Lacazette got on the end of his low cross.

Lacazette missed another decent chance as Arsenal broke forward, Sa doing well to turn his shot behind before Shkodran Mustafi hit the crossbar with a header from the resulting corner.

One goal would have to suffice for Arteta and his players, but it was a hard-fought win which they hope will be enough to see them through in north London next week.