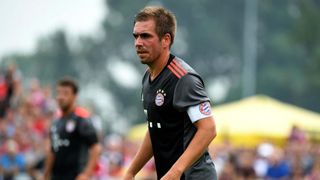 Bayern Munich captain Philipp Lahm expects a tough test from Borussia Dortmund in the Bundesliga this season despite a string of high-profile departures from Signal Iduna Park.

Pierre-Emerick Aubameyang is also attracting attention from across Europe, although Dortmund have moved to bolster Tuchel's ranks with promising talents such as Ousmane Dembele, Emre Mor and Euro 2016 winner Raphael Guerreiro all arriving.

Mario Gotze is also in talks to return to Dortmund from Bayern and Lahm believes Tuchel's side still hold a major threat.

"We will see," Lahm said after Bayern began their pre-season with a 4-3 win over Lippstatdt.

"But I think they will play a huge role this year because Thomas Tuchel is a great coach who is able to compensate for the losses of key players.

"They have a great team either way, no matter if they will make any further transfers.

"The system they play will fit them and they will play a great role. But nobody knows how far this will take them."

As Bayern look to maintain their stranglehold over the Bundesliga under Carlo Ancelotti, as they did with Pep Guardiola, Lahm's expectations for the season are undimmed.

"Everything is new. There is a new philosophy and we all have to get used to each other," he added.

We are quite strong. I think it is normal for a club who will compete for the Champions League title that you have to improve.

"This year we did it again and we have a great team which we had the years before as well.

"We got the same goals every year - we want to win the Bundesliga because you play every single week and therefore it's the most honest title.

"Furthermore there are two more competitions where we want to reach the finals, because we know how beautiful it is."