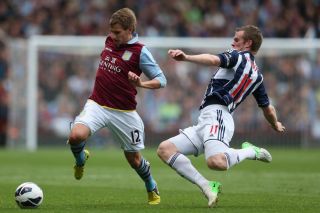 The 24-year-old's contract expires at the end of the season and Albrighton was quoted earlier this week as saying he was in the dark over his future.

However, Lambert has revealed talks have taken place between chief executive Paul Faulkner and the player's agent with a view to extending Albrighton's stay at Villa Park.

"Regarding Marc - that will get taken care of, I'm pretty sure, pretty quickly," Lambert is quoted as saying in the British press.

"I think Paul (Faulkner) has spoken to his agent a couple of weeks back. I think Marc's relaxed. He'll be fine. It will get done."

Lambert also praised Albrighton's attitude since he returned from a loan spell at Wigan Athletic earlier in the season.

"He’s been absolutely fantastic, on the top of his game," the Villa boss added. "He was excellent on Saturday up against left-back Luke Shaw (of Southampton), a player who you can understand is being talked about highly.

"I thought Marc was excellent, especially in the second half. He's been so unlucky with injuries but he's been very good since he's been back."

Albrighton has made 17 Premier League appearances for Villa this term.