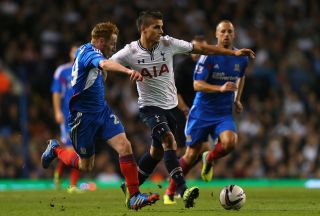 The 21-year-old arrived at White Hart Lane in August from Serie A club Roma but has been limited to only 68 minutes of action in four substitute appearances in the Premier League.

However, he has started both League Cup matches and all three UEFA Europa League clashes.

Lamela scored 15 goals for Roma in Serie A last season and insists he be ready to seize his chance when Andre Villas-Boas hands him a league start.

"My moment will come and I will make the difference," he said. "You always train thinking that you're going to play. Sooner or later, my moment will arrive and I have to be ready.

"That is the way I am looking at it."

Lamela is the only Argentine in Villas-Boas' squad and admitted he has struggled to adapt to life in England.

"I think I need a bit of time," he added. "I feel good here, although getting used to life here in every sense is a completely different thing.

"I've barely been here two months, so time is maybe what I need. I need training, a bit of rhythm, some games.

"English football is very different from the game in Italy – much more physical, whereas Serie A is more tactical. This is a style of football I like very much, though, and I think, with the way I play, it will be very suited to my game."