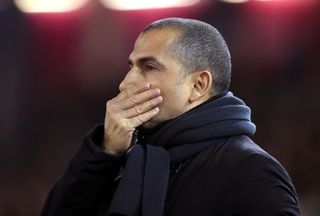 Sabri Lamouchi said he is not sure what to expect from “this crazy league” after the 1-0 Sky Bet Championship win at Cardiff.

Tiago Silva’s goal three minutes into the second half gave Forest their eighth away win of the season, and made it 25 points since Christmas Day.

It moved them to within three points of second placed Leeds, with another tough away trip to come at Middlesbrough on Monday night.

Lamouchi said: “I am enjoying this league, but to be honest it is just crazy.

“It was the perfect away performance and I’m very satisfied – three points and a clean sheet.

“If we keep this up for the last 11 games then why can’t it be promotion form? We are in good form and we are doing well, but this league is just crazy.

“Every game is very tough, whether at home or away. We need a good rest before we have another difficult game at Middlesbrough.”

Silva’s goal, created by Lewis Grabban, won the game and end a run of three games without a success for Forest. It also turned the tables on Cardiff, who won 1-0 at the City Ground before Christmas.

Lamouchi added: “What a performance from Lewis Grabban. And our captain, Ben Watson, was unbelievable and is having an amazing season.

“I’m just surprised at the quality of the spirit of the players. They aren’t tired. They want to play, they want to fight, they want to run and work hard together – it is fantastic.”

Cardiff boss Neil Harris had to reflect on his first home defeat since taking charge on November 16. The result leaves his side 10th, six points off the place off places.

Once again a controversial decision by the referee cost his side a penalty at the end of the first-half and Harris said: “When a referee gets it wrong he goes home and he is allr ight. For us that is two games in a row here that the referee’s decisions have cost us.

“It was a big moment in the game on the stroke of half-time. Who knows what might have happened if we’d got the penalty and scored it?

“He (Matty Cash) got nowhere near the ball. The ball was the wrong side of the player making the attempt. He kicked Josh (Murphy) and he had no option other than to go over given the speed he was running at, so it’s a penalty for me.

“They were a team we thought we could catch, but that’s going to be difficult now with games running out.

“We have to keep pushing to get back in contention for the play-offs. We need to turn the draws into wins because games are running out.

“We’ve got another huge game at the weekend against Brentford and while there is an opportunity we have just got to keep pushing.”

Harris dismissed any concerns over an onfield confrontation between two of his players, Leandro Bacuna and Callum Paterson, after the final whistle.

“They came in cuddling as they walked through the door. It was just frustration and it was quickly forgotten,” said Harris.