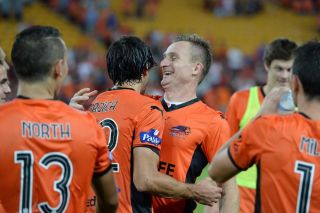 Sunday's result means the Premier's Plate winners progress to the Grand Final against Western Sydney Wanderers, while the Victory's campaign is over thanks to the effervescent Albanian striker, who will be joining them next season.

Berisha had been berated by his team-mates earlier in the game for not recycling the ball enough, but none of them were complaining when he went on a scintillating solo run in the 58th minute before firing home his 12th goal of the season.

The match ended in high drama as the Victory mounted an all-out injury-time assault on the Brisbane goal, which somehow they failed to breach.

Roar goalkeeper Michael Theo was forced into a number of desperate saves, defender Matt Smith survived a strong penalty shout after he lunged in to tackle Mark Milligan, and Matt McKay cleared an Archie Thompson effort off the line, in what was a stunning finish.

The penalty incident in particular will be a talking point in the aftermath, with Smith appearing to make some kind of contact with the Victory midfielder as he went down in the box.