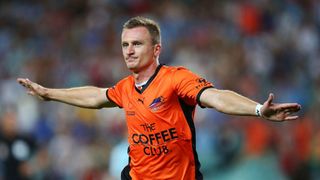 The game:
Melbourne Victory may be hitting top form at the right time, but they face a major test as their busy schedule continues with a semi-final clash against premiers Brisbane. Kevin Muscat has rotated his squad well as they juggled domestic and AFC Champions League duties, but it appeared to be catching up with his side in their thrilling 2-1 elimination final win over Sydney FC. James Troisi, Gui Finkler, Tom Rogic and Mark Milligan were absent for different reasons as Victory drew 0-0 at Jeonbuk Motors on Tuesday, ending their Champions League campaign. Brisbane should be fresh, with their last outing a 2-0 loss to Central Coast on April 12. Mike Mulvey's men finished the regular season on a two-match winless run, but still deserve to be favourites.

The big issue:
Roar – rustiness appears the only potential worry for Mulvey. A 15-day wait is a long time for most teams, but with that comes freshness the Victory would love to have. Brisbane have had the time to work on particulars and the way they start could be decisive. The Roar could start slowly, and that could be a danger against a Victory outfit who will want an early goal.. But they will undoubtedly finish the stronger of the two teams and their fitness could be the difference.

Victory – for Muscat's side, this is their seventh match of April, as opposed to just the Roar's third. Since Brisbane and Victory both played on April 12, the latter has competed three more times. After a strong start against Sydney, the Victory looked lethargic before Finkler's dramatic late winner. Several players may have been rested throughout the busy spell, but the additional minutes must surely catch up with them.

The game breaker:
Besart Berisha – the Roar's Albanian striker is taking on the club he will be representing next season. Berisha is without a goal since mid-March, mainly due to red cards in consecutive matches. He has netted 11 times this season and is generally one of the most dangerous attackers in any game. Berisha was closed down well by the Mariners, even when drifting into midfield, and the Victory may use similar tactics, but he only needs one decent chance to have an impact.

Prediction: Roar 2-0 Victory
A home clash against a potentially tiring Victory side gives the Roar the edge. Brisbane's ability to keep possession should also keep Muscat's men chasing for a lot of what should be an intriguing encounter. Thomas Broich and Berisha provide plenty of attacking class for the Roar to trouble Victory's defence, one which has Chilean veteran Pablo Contreras in arguably season-best form. The in-form Troisi also shapes as being a match-winner for the Victory, whose busy schedule looks set to finally catch up with them.