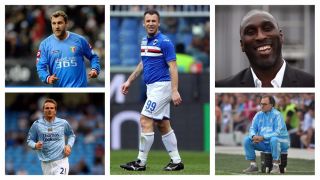 Antonio Cassano announced his decision to leave Verona on Monday, just a fortnight after joining the club on a free transfer.

It was rumoured last week that Cassano was going to retire from the game, only eight days after arriving, but the charismatic forward held a media conference to state he had opted to play on with the Gialloblu.

The saga took a (probably) final and definitive twist on Monday, however, and the 35-year-old's second U-turn may not come as a surprise to many, given his reputation for individuality throughout a checkered career.

But it got us thinking back to other examples of players and coaches enjoying - or should that be enduring - comically short stints at a new club.

A bizarre footnote to Campbell's otherwise stellar career. A two-time Premier League champion with Arsenal, the England defender moved to Notts County from Portsmouth in 2009 to be part of the Sven-Goran Eriksson revolution. He lasted just one game at Meadow Lane, however - an away trip to Morecambe - and afterwards informed the club that he wanted to leave, departing in the middle of a training session, according to then director of football Eriksson. Campbell reportedly felt cheated by the false promises of the club's owners and later returned to Arsenal.

The Nigerian's move from Lyn in Norway was a contentious one, to say the least. United claimed they had signed and then loaned Mikel back to Lyn in 2005. But complications arose as Chelsea insisted they had contributed to his education and that an agreement with the player's agent was already in place. A lengthy legal battle followed, with Mikel eventually signing for the Blues, saying that was always his wish although it was also reported he had shed tears when he could not move to Old Trafford. Still, 11 years and 10 major honours later, he's not done too badly out of it.

Vieri certainly enjoyed a nomadic career, but even by his standards his one-month stay with Sampdoria was particularly brief. The striker, once the most expensive player in the world, left Monaco in 2006 to return to Serie A but seemingly thought better of his stint with Samp, the club declaring the decision to split was taken after a "serene" meeting between the player and board officials. Vieri subsequently moved on to second and third spells with Atalanta, either side of a season at Fiorentina.

Perhaps this is why they call him 'Loco'. Bielsa signed a contract to join Lazio weeks ahead of the 2016-17 campaign, but reneged on that deal in the July of the off-season. Lazio threatened to sue the Argentinian over his U-turn, prompting Bielsa to hit back with a statement of his own that accused the club of failing to deliver on their promise of bringing in four new players. In the end, Simone Inzaghi took over and led the club to fifth and qualification for the Europa League.

The Germany international caused a stir as he became involved in something of a peculiar love triangle among Premier League clubs in the north west. Upon leaving Liverpool, where he had won the Champions League, Hamann signed a pre-contract agreement with Bolton but then changed his mind at the last minute, opting instead for a switch to Manchester City. Then-Bolton chairman Phil Gartside later insisted that Hamann had never actually been registered at Wanderers, whom he claimed received £400,000 for a player that never belonged to them in the first place.

The most bizarre story in the history of the Premier League. It still beggars belief how Dia pulled the wool over Southampton's eyes to the extent he even managed some game time, despite possessing practically zero technical ability. Claiming to be the cousin of the great George Weah, Dia blagged his way into gaining a trial with the Saints, whose injury crisis meant he was selected on the bench by manager Graeme Souness for a game against Leeds United. An injury to Matt Le Tissier saw Dia introduced in the first half, although his comical lack of quality soon became evident and he was substituted himself in the second period. As Southampton icon Le Tissier so succinctly puts it: "Graeme put him on and he was f****** hopeless, so he took him off again. It was crazy."