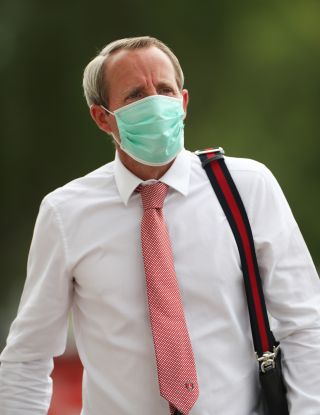 Lee Bowyer was proud of his players’ resolve and heart as Charlton overcame relegation rivals Hull to jump out of the Sky Bet Championship drop zone but warned them it is just the start.

The Addicks were facing relegation to the third tier on a points-per-game basis had the second tier been unable to resume due to the coronavirus pandemic.

But Bowyer’s men hit the ground running after the 15-week break, with captain Jason Pearce’s bundled first-half effort enough to see off lacklustre Hull 1-0 and leapfrog them in the standings.

“The good thing is that if you can get off to a winning start like now, we’re out of the bottom three,” the Charlton manager said. “Now it’s in our hands, you know?

“I believe in the players and I’ve said that all the way along. Once we get out, now it’s down to us.

“Now we’ve got a week to prepare for QPR. It’s going to be another tough game but I’ve just said to them it’s another game that we can win if we do the right things.

“It’s a good start but it’s not over yet. We’ve got to keep fighting for every point and the players done that today. I’m really proud of them.”

Hull could have few arguments with the end result at the KCOM Stadium, where Charlton could have won by more having frustrated the hosts for the most part.

“I think it was well deserved,” the Charlton boss, linked with the soon-to-be vacant Birmingham post, said. “I think from the first whistle we were at it.

“We looked sharp. This week building up to it, I said to the players that they’ve had a good week and they’re ready to go and they showed that.

“To get the goal quite early on was nice. I think we settled down after that and we got into some very good areas.

“I thought that on another day we could have maybe scored another two or three goal if the quality was a little bit better in the final third, picking out the right pass.

Hull drop into the relegation zone for the first time this season as a result of this meek defeat, having taken just two points from the last 36 available.

City boss Grant McCann said: “If I didn’t have any hope (of staying up), I wouldn’t be sitting here talking to you.

“We’ve got plenty of hope in the changing room. We know that the players will get better, the more we train, the more the games come on.

“Just today, I think the difference in the game was a set play.

“I think in terms of the whole game, we were in control and the possession stats back that up. We just didn’t find that killer edge.”

The main positive was Angus MacDonald’s performance on his first appearance since August 2018, having missed most of the last campaign with deep vein thrombosis before being diagnosed with bowel cancer at the start of this season.

“I thought he done well, Angus,” McCann added. “I’m really pleased he came through the 90 minutes unscathed. I thought he looked calm and composed.”