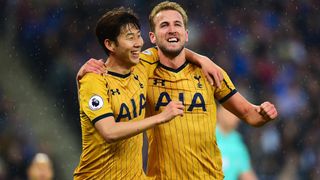 Four goals from Harry Kane and two from Son Heung-min helped Tottenham to a 6-1 battering of Leicester City in their penultimate Premier League match of the season on Thursday.

England international Kane moved to 26 in the top flight for this season – putting him two ahead of Romelu Lukaku in the Golden Boot standings – while Son took his tally to 21 goals in all competitions in the emphatic victory.

The hammering puts Spurs on 83 points for 2016-17, three more than Leicester managed when they were crowned champions last term.

Son and Kane combined to put Spurs ahead before the South Korea star made it 2-0 as half-time approached with a well-taken volley.

Ben Chilwell gave Leicester some hope with his first Premier League goal, but a Kane header and a brilliant Son finish ended the Foxes' resistance.

Kane then struck twice in the closing stages to seal the dominant win for Mauricio Pochettino's swashbuckling side.

The defeat, Leicester's 18th of a miserable title defence, saw them miss out on the chance to draw level on points with eighth-place Southampton and did little to enhance manager Craig Shakespeare's chances of holding on to the job for next term.

For Spurs, who move back to within seven points of champions Chelsea, it was another impressive performance in an excellent campaign that will finish against Hull City on Sunday.

Son twice had a half-chance on the edge of the Leicester area but it was Jamie Vardy who missed the first good opportunity, striking straight at Hugo Lloris after Riyad Mahrez played him through on goal.

Pochettino was visibly frustrated when Son blasted a golden chance over the bar after Dele Alli blocked the ball into his path, but the South Korea forward was decisive in helping Spurs take the lead after 25 minutes.

Son beat the offside trap to latch onto a simple long ball from Toby Alderweireld, moved into the penalty area and cut the ball back for Kane, who slotted home first time from 12 yards out.

Vardy saw appeals for a penalty waved away when Alderweireld shouldered him to the ground after an error from Eric Dier, and it got worse for Leicester before the break, Alli clipping the ball over Yohan Benalouane and Son steering a volley into the bottom-right corner to make it 2-0.

Shakespeare switched his side to a back three for the second half and the change triggered a response, with Mahrez testing Lloris from 20 yards and Marc Albrighton seeing a promising opening snuffed out by a fine Eric Dier block.

With 59 minutes gone they found a lifeline. Lloris failed to clear his lines after racing out to challenge Vardy – who looked to have strayed offside in the build-up – and when Wilfred Ndidi scuffed a shot towards Chilwell, the full-back showed great composure to steady himself before slotting into the net.

Hope of a comeback lasted barely four minutes, however. A good team move from Spurs saw Moussa Sissoko feed Alderweireld in space down the right, and Victor Wanyama headed his cross back towards the near post giving Kane the simple task of nodding the ball beyond Kasper Schmeichel.

Son made the win an emphatic one with the best goal of the game. Striding towards the Leicester area on the break, he lost Ndidi with a clever turn before bending an excellent finish beyond Schmeichel's outstretched arms from 20 yards.

And there was enough time for Kane to take his tally to four and move top of the league's goalscoring charts outright. The 23-year-old blasted a low shot from the edge of the area that seemed to fool Schmeichel as it flew beneath him and into the net, before being granted time and space to produce an almost identical finish to cap a dominant display.