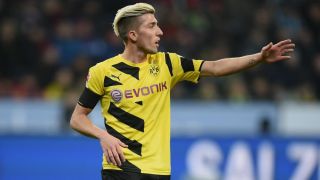 Kampl makes the move to the BayArena on a deal that ties him to the club until 2020 and sees the Slovenia international return to a team with whom he spent much of his youth career.

The midfielder originally joined Leverkusen in 1997, but left in 2011 after making just one senior appearance.

Following spells with Onsabruck, VFR Aalen and Red Bull Salzburg Kampl made the move to Dortmund in January, but he leaves Signal Iduna Park having featured only 19 times.

"I am looking forward to returning to Leverkusen, where I made my first important steps as a young player in Bayer's Under-23s," Kampl told the club's official website.

"To now link up with the professional team in the Bundesliga and the Champions League is great."